It’s been a while since blogging about Georgia. Well, that’s because she’s been in the shop. Jason and I decided we’d fix her ourselves. We changed the chain and the rear sprocket, which was bent when hit by a car. The tire has been balanced, and Jason took her for a spin. I haven’t ridden her, though, because I was afraid to ride her after an amateur balanced her tire.

The rectifier I installed works. Her battery’s been charging just fine. I wrapped it in heat resistant tape (up to 500 degrees F) and bolted/grounded it to the frame where the old rectifier was. I’ll put rectifier pics up later.

Anyway, Georgia was too small for me to ride anyway. I couldn’t get her over 55 mph over the Manhattan Bridge, the way I ride to get home from the city after work. And I certainly was unable to pass a truck safely, so Jason decided I needed a bigger bike.

Here she is! Her name is Molly. Ain’t she a beaut? 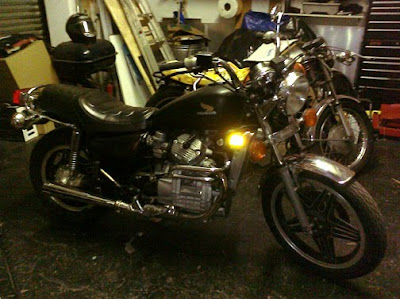 We got her yesterday. The owner thought the rectifier was bad. We test it, and it’s fine. BUT the wiring is a mess. The battery was probably discharging through all the exposed copper throughout. This is what it looked like behind the headlamp: 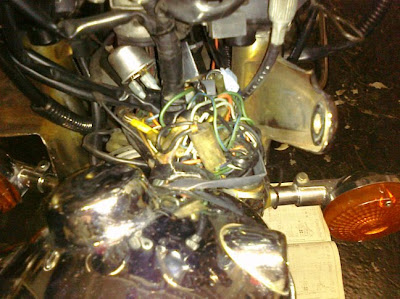 I’m gonna work on her today. Clean her up nice. 🙂