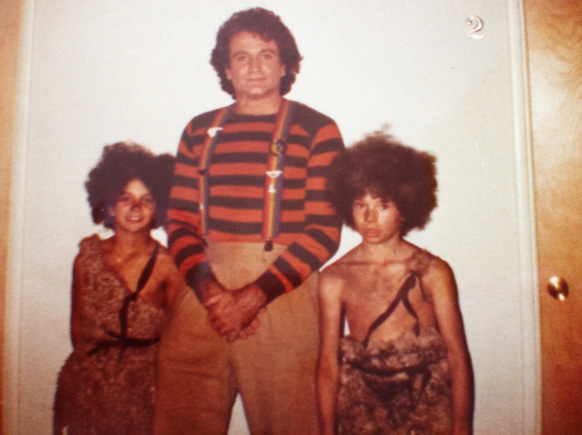 There is much sadness along with the news of Robin Williams’ passing. He was one of my favorite comedians, one who seemed down-to-earth and well-liked in his neighborhood of Sea Cliff and around town in San Francisco.

My co-worker, Chris, shares this:

I don’t know how old I was, but I do remember filming this episode of “Mork & Mindy” at Paramount Studios.  It was an episode where “Mork” got a pair of “Ruby Red Slippers” and was able to travel through time – hence my “Caveman” costume” – LOL!

I remember everyday on the set like it was yesterday.  I was very lucky to get to do my makeup with Robin every morning, he would sit in the chair next to me, while the makeup people worked on us for about an hour or so.  He was so nice to me, even though I was nobody, he would talk to me and make everyone in the room laugh.  It was a very memorable time – it was also a historical time, as one morning in the makeup room, Robin got a call and someone passed him the phone, he said a few words on the phone and then he fell silent and almost broke–down, when he left the room, someone told us John Belushi just died 🙁

Yesterday, it was shocking to hear about Robin, I just couldn’t believe it – so I dug these pics up, I have a whole roll from working on the set, but this pic in particular I really remember everything about when we took it.  This was just outside the makeup room on the set and I think was the first time we completed our “Caveman” look.  I remember a ton of people standing on the other side of the camera all excited and such – it was funny.

I never knew he autographed the picture for me, until yesterday when I scanned it?  I guess after taking the pic, my mom must’ve gotten the pics developed, then tracked him down and ask him to sign it for me, as I was a HUGE “Mork & Mindy” fan 🙂

I never met him in person myself. But if I had, and knew of his rehab, I would have shared with him about Sensory Emotional Regulation. It’s the technique I used when I felt like death was better than life.

We lost a true hero, who used time, energy, and celebrity to work with charities. But we don’t have to allow this loss to breed complacency. Instead, we can continue to seek solutions. We can encourage each other, spend time with friends, and make the most of the lives we have.

The news of Robin Williams’ death instigated a conversation with a friend. I said that his apparent suicide made me want to work toward teaching people about the SER technique. To this, my friend admitted to having suicidal feelings and volunteered to be my next client. It was the first time my friend shared this with me. It made me think about the thousands of people who never talk about these feelings.

Some people will never let out that they want to kill themselves. And there is little we can do about that. At the least, we should spread hope, which is why I blog.