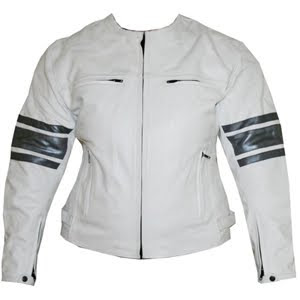 I had my first solo ride to Queens today to see my brother on his birthday. I avoided Queens Boulevard as much as possible, taking Greenpoint Avenue all the way from Greenpoint, Brooklyn, to 48th Avenue in Queens. On the way, it rained a bit, but just spit. The pavement stayed relatively dry.

The leather is nice and thick. It has back protection made with dual density foam, elbow and forearm pads, and shoulder guards with foam and PVC armor. It also has vents on the front and back that can be unzipped.

The best thing about this jacket is that drivers see me. It was a marked improvement between what I wore before and this white jacket. Before, wearing an earthy orange leather jacket, I had to constantly watch how cars crawled at an intersection, then slow down to make sure they didn’t just pull out. With the white jacket on, drivers saw me right away and stopped– no crawling.

People on the side of the streets see me too. Two guys today in different locations said something to the effect of, “Wow, you look hot on that bike.” Never happened before, except from my boyfriend. I guess they could tell I was a girl, cause I wore a pink hoodie.

I was excited and nervous before getting on the bike today. But after riding for several miles and seeing how much better traffic responds to the white jacket, I feel much more comfortable. One guy, though, still didn’t stop, however. And that was one block from home. The guy pulled out, didn’t stop at the stop sign, didn’t see me, even with the jacket on. I might have been camouflaged against a white van or truck. I gunned the throttle and escaped the possible accident.

Unfortunately, there’s no nighttime reflective material on the jacket. So, I ordered some glass reflective beads, used on traffic signs and streets. I’ll glue them on the jacket, on the stripes on the sleeves and make a star emblem on my back. Then, I’ll feel a bit safer riding at night.

Be thoughtful about what you wear on your motorcycle!