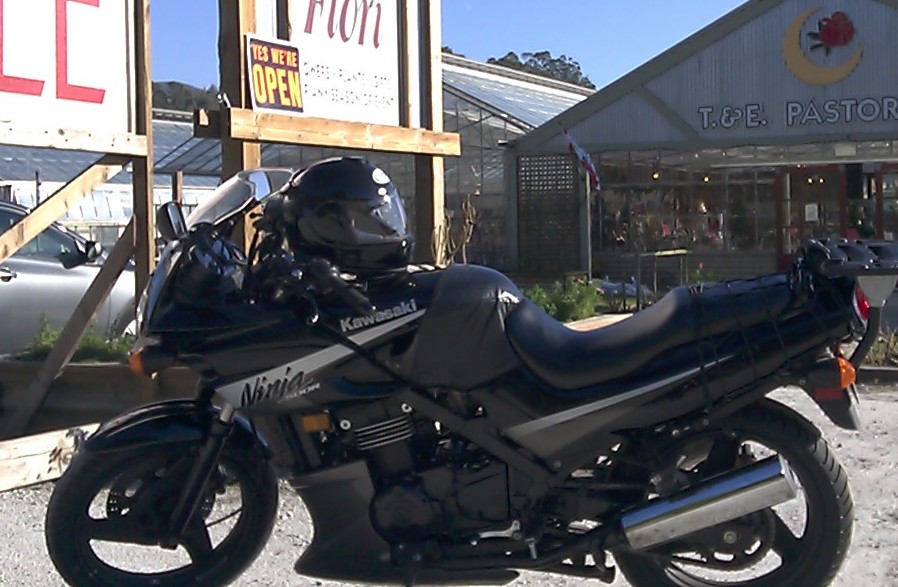 The San Francisco bay area has a riders’ forum called BARF, Bay Area Riders Forum. I found an overpriced 2005 Kawasaki Ninja 500 for sale in Sacramento. Three days after arriving in San Francisco, I got on a train to Sacramento and negotiated down to all the cash I had on me of $2,200. It was $200 more than the most I should have paid for this bike. But I needed a ride and there wasn’t much out there that was reliable and in my price range.

The Ninja had over 19,000 miles on the odometer and the tires were shot. How the guy thought he could get away with telling me they were “relatively new” is beyond me. Relative to what? A Model T Ford? He also said it “leaked” radiator fluid. Still don’t know what he meant by that, but fortunately the radiator hasn’t leaked at all. Between the tires and a radiator leak, newer tires would have deserved that $200.

California motorcycle registration is very different from New York. In New York, the seller removes the plate to bring it back to the DMV in order to get a refund on paid insurance premiums. The buyer then takes the bike to a motorcycle registration location where the inspector checks to make sure the headlight, brake lights, and all turn signals work. He (or she) also checks to make sure the front forks aren’t leaking fork oil. Most importantly, the inspector checks that the tires have treads and aren’t cracked. To think that there are motorcycles all over California with tires with no traction is concerning.

At the DMV, I had to get a California driver’s license and take car and motorcycle written tests. But everyone who worked at the DMV was smiling, friendly, and helpful. Must be the sun.

The Ninja got her name within the first 20 miles back to San Fran. She felt more like a rough stallion than a racing mare. On the highway, Jessie quickly got up to speed with her parallel twin engine that whinnies at 10,000 rpm. I was told by numerous riders that Ninjas are torquey. It took a few weeks to get used to the jolt from zero, and its higher-end gear ratio brings some frustration riding with slow traffic.

My Suzuki GS, Flo, was an inline four-cylinder sail. On the highway, you could ride 90 or 100 miles an hour without realizing it. I never took Flo over 100, in fact have never ridden over 100 mph. At least I don’t recall. One thing about PTSD is that things can happen without a sufferer realizing it.

I read somewhere that PTSD involves a repeatedly increased level of catecholamines, or adrenal gland hormones. That includes epinephrine (adrenalin), norepinephrine, and dopamine. Before I knew how PTSD has affected me, I was apparently constantly charged with a propensity for fight or flight, usually fight. Danger got me excited. If Flo wasn’t so old, I might have pushed her faster. But I didn’t know I had PTSD. All I knew was that, to me, riding a motorcycle was the best thing in life. I wished I had ridden earlier in life. This year, 2013, will mark four years of riding.