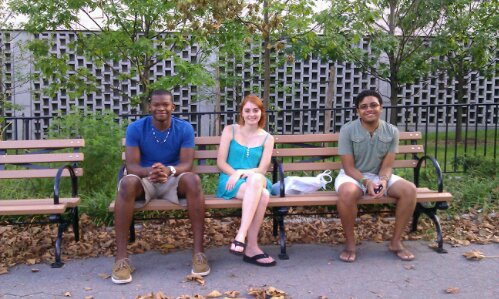 Gabapentin has been a game-changing treatment. I had been so dull to what was happening around me that I didn’t realize I felt irritable until there was a conflict with another person. The irritablity became hypervigilance and out of nowhere I went to war. Now I can feel irritability as the medication wears off. The feeling has become a reminder to take a dose. If I don’t take it, hypervigilant battles soon follow.

On the flip side of the experience, as the medication helps take away anxiety, I have been feeling happier and more social. There is no better place to be than New York City when feeling sociable. As fortune had it, I was.

In Brooklyn’s Walt Whitman Park, I came across a group of three people hanging out. They each had a different complexion from the others. It was the first thing I noticed about them, and it made me proud of Brooklyn. Denzell, Elizabeth, and Clifton were chillin’ on a bench. No special activity. Just hanging out with each other. One thing that disappointed me when arriving in San Francisco was the lack of conspicuous multi-cultural relationships outside of a few mixed-race couples. People say and think San Francisco is diverse, and it is in the census. But in reality, it is rare to walk into a restaurant and find white and black people sharing a meal. Sometimes there are white and yellow people eating together, but even this is not as common as one would think given the population. In my regular DUMBO, Brooklyn, stomping grounds it is uncommon for the larger groups I hang out with to be homogenous.

This lighter experience sparked an energy that hasn’t been around for a long time, possibly since before 9-11. There have been days of mustering the strength to be social in order to accomplish a task, such as guerrilla marketing for my book, or looking for love. But I don’t remember going out for the fun of being social in all my years of ignorant living-with-PTSD. I’m reminded of the kinds of people I used to spend time with for fun. They were from all different backgrounds, socioeconomic and racial, and they had different levels of intelligence. I can’t say that I have the energy now for spending time with the same group of people, but I definitely long for interracial relationships. (I say this forgetting I’m yellow. I’ve had moments thinking I was like a banana or a Twinkie: white on the inside; but now I think my insides are multiple colors.) Relationships with people who have had different social experiences from me are the ones that inspire me to be a better, more active person. They are the relationships that motivate me to take this medication and smother hypervigilance.