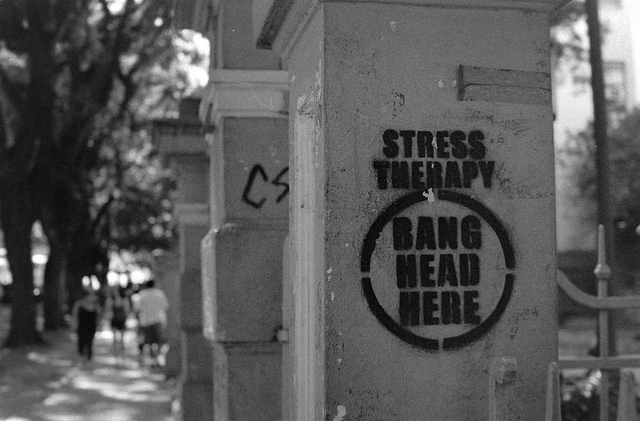 Before 9-11, I thought therapy was for people with no friends. Even started writing a song about it: “You can buy a friend for $12 an hour…”  (That line was not actually about a therapist but a home health aide. Point is made.) To me having no friends was an indication that a person was seriously flawed. Then 9-11 happened.

Anyone with enough close friends knows that it’s not a good idea to vomit all your woes on them. It took me a long time to learn this — and after losing friends, probably because I sought them for therapy. That was probably why I took to riding motorcycles.

Anyone can have difficulty seeing or understanding clearly. But having a mental illness takes lack of clarity to a different level. Experiencing it firsthand is why I now value therapy. No one sees clearly in the dark.

An effective therapist, in my opinion, should have a good understanding of a patient’s condition and be able to direct that patient toward a better understanding of his or her own mental health, and help enable the patient to do what is needed to heal.

When I first started therapy in 2011, I thought I would go through a few months of sessions and then be on my own again. But I didn’t know or understand how deeply PTSD affects.

My first therapist was an intern. Zoe was sweet and compassionate. And she had a lot of passion, which came through in how she connected with her body language. She watched me cry as I spent the first several sessions recalling the events of 9-11 and the weeks following. I hadn’t thought much about those days until these sessions. Talking about it all opened up a pandora’s box of emotions that I didn’t know were there.

My second therapist took over when Zoe’s internship was over. Melissa’s approach was similar, but her questions were more inquisitive. I felt interrogated at times, only because I had expected to be done with therapy and moved on in my life. I’d even told Zoe that I didn’t think I’d need therapy anymore. But she convinced me to give Melissa a try. By the end of 2012, Melissa had helped me make a connection between behaviors that were not normal for me and reactions that result from trauma.

People can develop PTSD when they have a history of past traumas, and then don’t react in fight or flight to subsequent traumatic events. Instead they might behave heroically, or freeze. At some points in the hours following the planes crashing into New York, Pennsylvania, and Washington, D.C., I behaved both ways.

My symptoms got worse once I understood the extent of 9-11’s effects on me. It was a matter of seeing gaps between normal reactions to everyday occurrences and how I reacted to them. While spectators gasped at a fist fight, I thought about how to get in the middle of it. While the world was reacting with compassion to the billions of dollars of damage to New York City by Hurricane Sandy, I wondered why the storm was getting so much television coverage. I watched the storm on CNN in a hotel room, incidentally stuck from going home after a family vacation. “It’s like 9-11,” I thought. And then it hit me how abnormal I was.

I was not myself and desperately wanted to be me again. Everything was spiraling downward. After the hurricane, I stared at my computer screen at work for 20 minutes at a time, hand on the mouse, clicking at nothing. I had such a strong reputation at work, though, that no one said anything about my lack of productivity. Before leaving that company, one of my co-workers told me how colleagues were afraid of me because I was unafraid of office politics.

New York at the end of 2012 was still largely ignorant of how to treat the mental damage of 9-11. So, I left. It was depressing to live in a city still affected by an eleven-year-old trauma. The symptoms of PTSD were everywhere. Though my neighbors were full of compassion and available to help 24-7, they were bruised and suffering internally with the same strife I felt. A blind person can’t lead the blind.

I thought San Francisco would be enough of a change for me to “snap out of it.” But after four months had passed and I was unable to find a suitable job, I sought disability. But I needed a therapist to sign the forms. Still not a fan of therapy, I now had another reason to find one.

Most mental health professionals in the San Francisco bay area with “PTSD” listed in a psychology directory as their specialty only had experience with patients suffering from traumas stemming from relationships. That didn’t deter me from inquiring of their help. In fact, before finding Eamonn whose experience included working with victims of terrorism, I sought 3 others. One was unreachable. The other two turned me down; apparently my case was more than they could handle at the time.

Eamonn is from Northern Ireland and like Zoe, was an intern. (He is now fully licensed in the state of California.) His approach is different from both Zoe’s and Melissa’s. Eamonn had had 15 years’ prior experience working with people who were injured in bombings, who witnessed detonated bombs, or who had loved ones who were victims of those bombs. During the first couple of sessions, I didn’t think he would be able to reach me, because he wasn’t inquisitive like Melissa, or overtly compassionate like Zoe. But now I realize his approach stems from his experience with terrorism as a daily threat. He had been observing me and taking my temperature before deciding the safest way to address my needs.

Once he understood what my symptoms were, the coping mechanisms I had in place already, and how I worked with my previous therapists, he set a goal for me to go back to work within six months.