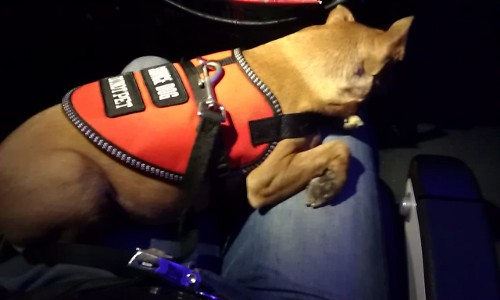 The weather forecast in December 2012 didn’t look good. Snow was expected across the country including in the path I hoped to take. Rather than get stuck or ride an extra day south, I decided to sell Flo, my 1983 Suzuki GS550E, send my personal items on a truck, and fly to San Francisco where I hoped to find healing from PTSD.

A guy in Williamsburg in Brooklyn bought Flo as a beginner bike. I watched him test ride her back and forth around the block before handing off her title in exchange for an envelope of hundreds. It was bittersweet as I was able to unload my bike just before winter for a decent amount of cash. Yet I had great memories with that Suzuki. Maybe I’d find a less rusty, newer bike on the left coast anyway.

At JFK, a letter from my therapist in my pocket and my dog Penny at my side, I stood in front of security check-in all of the sudden realizing that I was about to leave New York City, my home of 19 years, for a state on the other side of the country.

I had never been someone who easily cried, especially in front of strangers or even friends. But in that moment at the airport, I became overwhelmed. Tears streamed down my face. Crouching down, dog’s tail wagging in support, I held Penny as my eyes started to make a puddle on the linoleum. I couldn’t stop the tears or the sobbing. Though people were around, getting on line or waiting for loved ones, as far as I was concerned no one else was there except the TSA employee who looked on as if this happened all the time.

Sometimes it takes a tragedy or more to release our inner windings. Trauma can cause us to react to life abnormally. But we don’t realize our reactions are abnormal until we gain perspective.

It seemed like minutes had gone by before thinking I might miss the plane if I didn’t gather some courage. Deep breath in and hard exhale, Penny and I proceeded toward the gate.

Settled in a temporary home on the other side, the first thing I did was look for a motorcycle. How else was I supposed to get around to look for a place to live?

One Reply to “The Move”