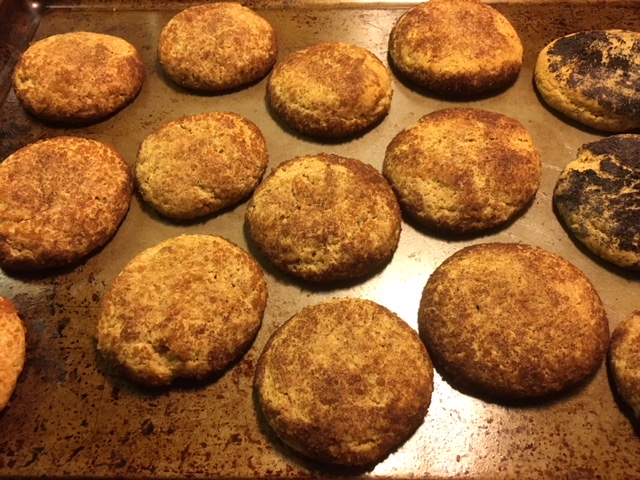 Tartar comes from wine barrels. Wine is sometimes finished with animal products. Therefore tartar might not be vegan. This cookie recipe is truly vegan.

In a separate bowl, combine:

Mix dry and wet ingredients together. Let the dough stand or put in the refrigerator until the dough becomes stiff enough to form balls.

Preheat the oven to 375 degrees F.

In a shallow bowl or plate, combine:

Roll dough into balls about walnut-size. Cover with cinnamon sugar, press into pucks, and place on an ungreased cookie sheet or parchment paper. Bake for 8-10 minutes or until the edges are browned.

Instead of vanilla, try a flavor-infused liquor like triple sec, or try lemon rind.

Try maqui berry powder instead of cinnamon sugar. I had run out of cinnamon with this batch and put maqui powder on a few of them. (See the image on the upper right.)

One cup of whole wheat and a half-cup of unbleached flour also works well. The more whole wheat, the more time the dough might need to stand. The bran in the whole wheat takes some time to soak up moisture. Though it might not be necessary to wait for the dough to stiffen, especially if you use less apple sauce or milk.