Last Fall I acquired Flo, a 1983 Suzuki GS 550E. One ride at 80 mph on a windy, hilly 4-lane highway, and I was hooked. Sixteen valve inline fours – that’s her engine and now my engine of preference. 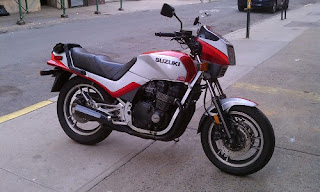 Eager to ride after a long winter, I’ve been riding as much as possible, taking excursions as short as a mile just to take Flo on the road. Rain? I don’t care. As long as it’s not freezing rain, rain is an opportunity to improve riding skills.

The first night of rain, I had been out with a friend at a bar. Uh oh. Bar. Worst case scenario, I’d park the bike overnight and pick her up in the morning. But when the rain started to fall, I couldn’t leave Flo there. Not that she’s an inanimate object or anything. She’s quite animated when that throttle is twisted. 🙂

At 3:30 am, I was feeling sober (only had one cocktail), but I waited 40 more minutes just to make sure. The roads were glistening. Drops were everywhere and the drizzle kept falling.

Slow and steady wins the race. I don’t think I’ve ever ridden Flo so carefully. I proceeded like an old lady in a Cavalier. Avoiding every puddle – you never know what’s under the water on a New York City street – each turn was in expectation of surprise. Plus there was the constant scanning for idiot taxi drivers who don’t care about anything except getting cab fares.

Fortunately, that night I wore leather tracker pants in case it rained. Plus, it was after 4 in the morning and the streets were pretty sparse. Though even at that hour, taxis still roam.

Only a tiny percentage of city riders take to the streets in rainy weather. They’re the fanatics, the lunatics who increase their chances of death tenfold, maybe more. For a beginning rider, and intermediate, every ride is a potential skill-building opportunity with the added value of the big enjoy of riding. So, maybe i’m a lunatic, but I also want to be a better rider.

It’s good to be a little nervous. Keeps you alert.

The second night of riding Flo in the rain was two nights later. Easter night. It was beautiful all day with temperatures in the high 60s, low 70s. Perfect. I had to go to work after spending time in the park. But when I left the office, the streets once again were shining from an evening drizzle. I think there was thunder and lightning too, but I couldn’t hear any from inside.

This time, there were no drops obstructing the view through the windscreen. Everything was clearly visible, including the police car that took an abrupt left turn into my path. Braking was scary as I expected to slide across the pavement. Fortunately, I had been keen on avoiding the puddles, and there were no potholes or metal hole covers in my path. And thank God, the cop saw me and stopped. If he or she hadn’t … well, you know. The adrenaline pumped.

Cagers don’t realize how dangerous is it to ride a two-wheeled vehicle on wet pavement. They have 4 or more tires and more than twice the traction. (More than twice, because car tires are wider.) So they will pass by as if it’s any other driving day, sometimes cutting you off or squeezing next to you to get ahead. They also have ABS almost standard. They don’t know how easy it is for a motorcycle to fall simply from braking in the rain.

To make it worse, they just don’t see until it’s often too late, or never.

I appreciate every driver who looks over at my bike at red lights, leaves extra space not to tailgate or to let me cross lanes. Every time someone makes it clear that he or she sees me, I just want to get off, go over, and give that person a big hug. Thanks, Drivers Who See!