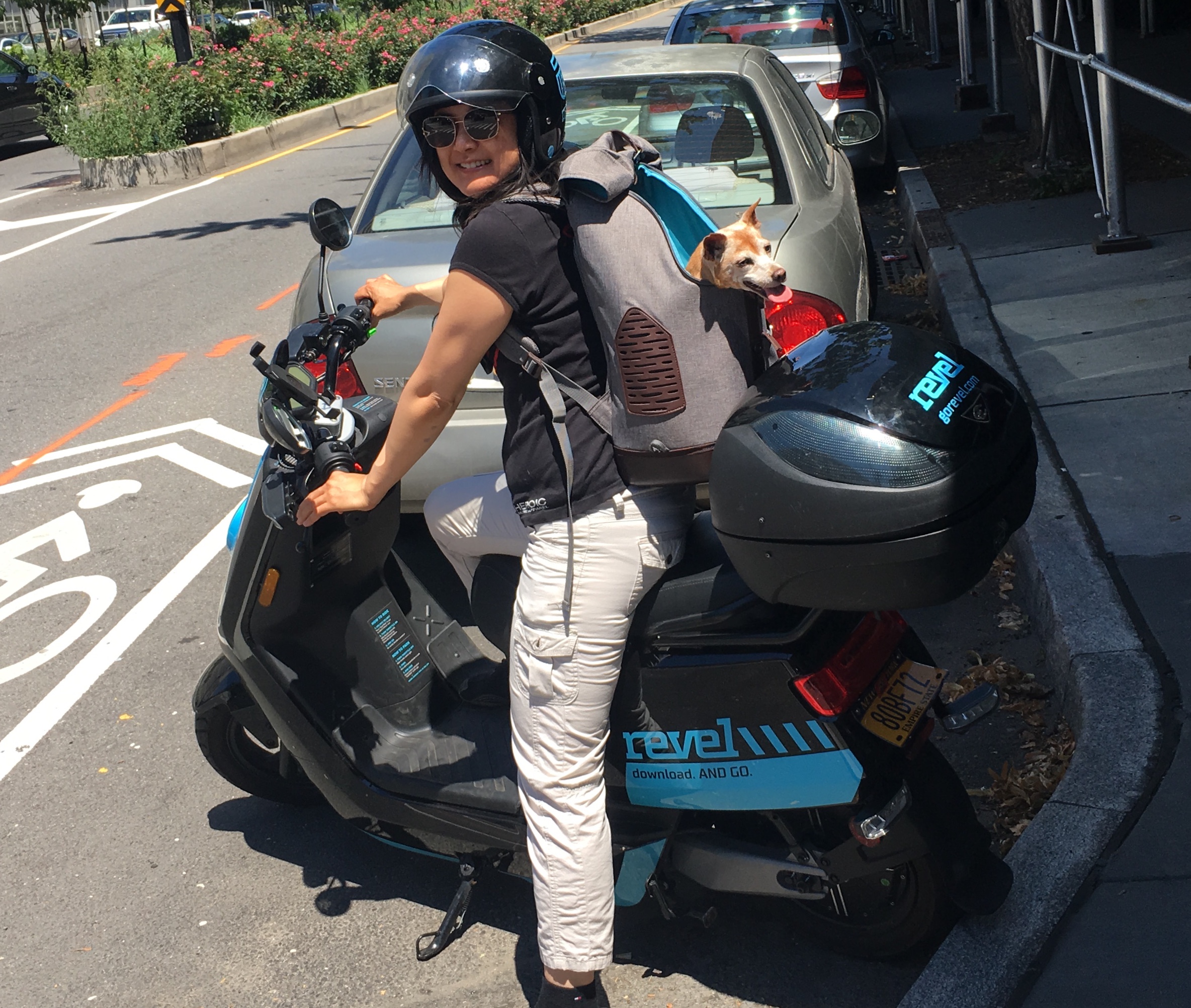 Editing note: The title of this post was previously “Yamasaki Electric Scooter Ride.” Revel replied to my message asking about model information, since the only identifying information was for its Yamasaki chassis.

Since becoming vigilant in healing from PTSD, I let go of my motorcycle hobby for a while and still have two unfinished bikes in the garage. (One of them just needs it’s clutch plate loosened by engaging gas plus brake to get it unstuck.) I don’t know why I have no motivation to finish these projects. During my darkest PTSD days, fixing bikes was my only motivation. I still get my two-wheel motorized biking fix by riding shared motorcycles.

In Brooklyn, NY, a company called Revel (gorevel.com) has a fleet of Niu electric motorcycles for ride sharing. I joined for $19. And with my service dog in a Kurgo backpack, we hopped on and rode to Penny’s vet appointment 1.6 miles away and got there in 9 minutes. Cost for the ride: $3.54. Wait time: none. Cab savings: at least $10 and who knows how much time. Bicycle share savings: $-0.54, about 10 minutes, and a whole lot of sweat — it’s hot outside. All in all, it was more than worth it.

This sweet little hydrocarbon-free emissionless vehicle has a powerful starting torque. (Revel really needs to warn new riders about this, lest a newbie gets scared and loses control.) It gets in front of traffic and can stay ahead thanks to its over-NYC-speed-limit top speed of 29 mph. It’s almost as fast as a 49 cc gasoline scooter can go with a lightweight rider and more peppy than a 4-stroke. Actually, it’s much peppier than the Honda Metropolitan.

I was impressed by how solid the little bike felt on the road. Brooklyn’s Flatbush Avenue is no smooth highway. There are dips, cracks, and bumps from dozens of contractors patching up the street after infrastructure work followed by heavy trucks compacting the asphalt here and there. I could hear parts rattling while going over unavoidable bumps, but the rattling was nothing like the softer plastics on a GenZe. It was probably the sound of the passenger pegs bouncing in their cradles. I suppose the Yamasaki chassis had something to do with it.

After Penny’s brief vet appointment, I was surprised to find someone had hired the bike I had parked out front. Revel’s got many customers. But I found another one not too far away. On the Revel app’s map, some bikes had 50 miles of power. That’s 15 miles more than GenZe’s 2.0 electric scooter. Though this Niu N-Sharing model’s handling was not as easy as GenZe. It felt a bit heavy in the front, and I wondered if there’s a battery stored in its apron. The battery is actually stored under the foot platform But once the scoot got a move on, it was fun and maneuverable. At low speeds the bike got a little wobbly. I would have moved the battery back a little to get the bike’s center of gravity horizontally closer to the rider’s.

Why does this bike get more miles than the GenZe and have stronger torque? Maybe because of its 22-pound, 29 amp-hour battery with Panasonic lithium-ion cells that put out 3.48 kilowatts of power, plus its Bosch motor.

At one point during my ride home, I took a fast, hard-leaning left turn. I’m not sure what scraped the road. It was either the kickstand grab tab or the left passenger foot peg which seemed to have a loosened or broken part and would not retract. I suppose next time I’ll have to get my butt off the seat like a racer to prevent scraping it.

Niu makes these bikes especially for ride sharing, hence the top-speed at a level that one doesn’t need a motorcycle license to ride it. Though other N-series scooters also have low top-speeds. I suppose it’s Niu’s 49-cc version. Niu’s NGT model has a 105-mile range with a top speed of 44 mph.

Need I say I’m impressed? Now I gotta figure out how to get one in my garage.