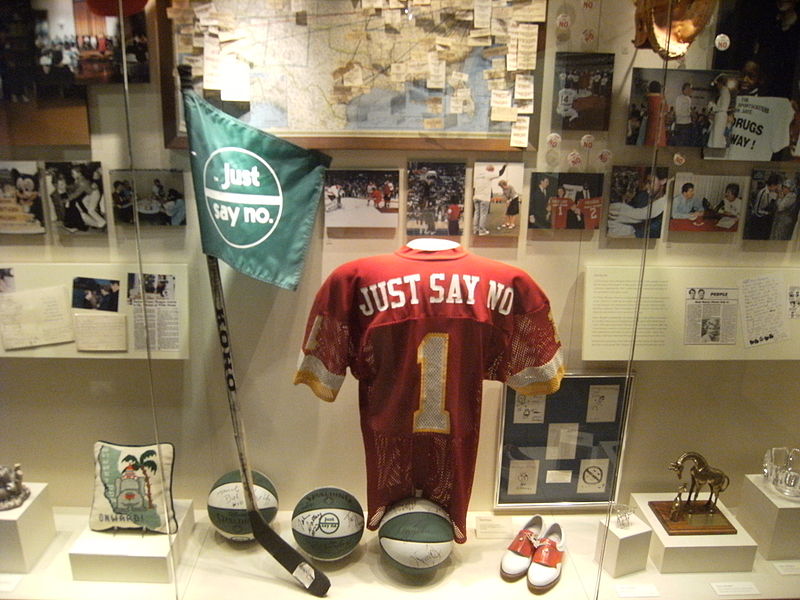 One important lesson I’ve been learning in the healing process is how to say “No.” This was not easy for me having been sexually molested as a child. Instead of saying No, my shame and depravity had silenced me in numbness leading to date rape situations in adulthood. Had I learned to say No, I could have drawn a firm boundary clear enough for those men to see. The third and last adult incident solidified a conviction to draw that line. I finally had had enough of the victim mindset. It’s not good for anyone, victim or perpetrator.

Without healthy boundaries, we cannot heal. It begins with No.

First lady Nancy Reagan made No popular with her “Just Say No” campaign to reduce pre-teen and teenage drug use. The campaign took place in the 1980s around the time when cocaine use peaked and the news reported a rise in marijuana use by pre-teens. It didn’t apply to me, I thought. I wish someone wiser had taught me.

Sometimes it takes painful repeated conflicts to get the conviction we need in order to become resolute about our boundaries.

Alanon members can relate. Say your significant other is an alcoholic. Let’s call him or her Sam. Sam lives with you and drank rent money one weekend at a swanky bar. You cover the rent by dipping into your vacation fund. The following month it happens again. You haven’t been on vacation in 3 years. Where do you draw the line? How do you keep Sam from crossing it? These answers are not always easy to find. It may take input from others or maybe some Alanon meetings. CODA (Co-dependents Anonymous) is another group that has AA-format meetings that could help.

My biggest No in my healing process was deciding no more responsibilities. I have a tendency to fix things, like a weak community. I was an activist for the environment, for building relationships within my neighborhood by throwing parties, and upkeeping a motorcycle garage/workspace for ten riders. I said “No more” and drew a thick line by leaving New York for a city where practically everyone was a stranger. It was time to heal from trauma. Moving across the country prevented people in New York from crossing that boundary.

Boundaries may also be needed for more trivial matters. For years, I didn’t want to answer the phone whenever it rang. The ring irritated me. I believe this was the result of answering the hospital hotline on 9-11-01 and losing the stamina to pick up after repeatedly giving regrets to callers knowing that no one survived the implosion of the World Trade Center. In healing from PTSD, I think it’s important to avoid negative feelings such as irritability as much as possible. So, to avoid it, I’ve requested some people to text instead of call on the phone. It’s basically saying, “No, do not call me.”

Sometimes boundaries need to change. If I never answered the phone because its ringing irritated me, I would lose touch with people and possibly lose friendships. That’s definitely not healthy. Instead, there are compromises, made as pleasant as possible. For example, thanks to mobile phone technology, I’ve changed the ringtone of callers I want to talk to to a sound or song that I like.

We can’t stop everyone from crossing our boundaries. But having boundaries will protect us more than having none. It’s a beginning to figure out what we need or don’t need. We can build self-awareness, adjust the lines as needed, and hopefully architect a safety zone that enables healing.

I don’t know if saying No would have stopped any of those men I dated from proceeding to invade my space. The good news is, people are taking action to protect some of us who can’t find the strength to say No. As of the date of this post, advocates in California are working on defining consent for sex with the word yes. That means, in court cases, anyone who has had sex with another person without the other person saying “Yes” could be convicted on charges of sexual abuse.

Sometimes we need help drawing our boundaries. Accept the help.